The Unrevealed Technology: How Do Night Vision Goggles Work 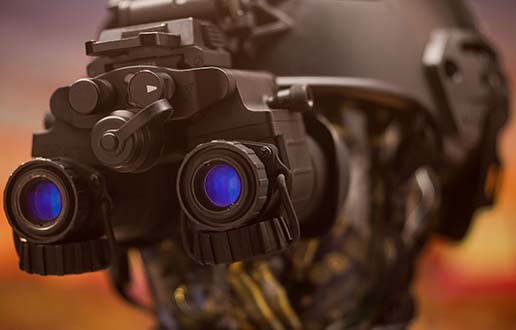 Did you know that cats are the nocturnal hunter and can see in the dark? Well...almost. Compared to human, cats have six times the amount of rods in their retina that are perceptive to poor light. This means they can see using about 1/6 the measure of light that we humans require. We may be not as gifted as our feline companions but as people, we up-to-date and high-quality night vision devices. One of such devices is night vision goggles that allow us to recognize things hidden in plain sight. In today's article, we're gonna talk about the principles of how night vision runs and reveal why the image is green. What is more, we will find out the differences between night vision and thermal imaging as well as explain the assets and drawbacks of night vision devices. Intrigued? just keep reading.

The Inception of Night Vision


Night vision is a green glow that you notice in footage from nighttime battles or in action movies. The latest Generation can turn night into day, well...greenish day.Image intensifier night-vision emerged since World War II times and starting from that time its inception, which we classify as Gen I, has quickly evolved. The technology of seeing in the dark that we use today, classified as Gen 3, is far more capable than ever before.


Scientifically speaking, image intensifier night vision technology simply magnifies the number of received photons from light sources including starlight and moonlight. Incoming light enters a lens and follows a photocathode plate where the photons are transformed to electrons. Next, the electrons are transmitted through a vacuum tube where they hit a microchannel plate that causes the image to illuminate a picture in the equivalent pattern as the light hitting the photocathode plate. But now they are amplified bigger and brighter than the photons when they joined the lens. We guess you can think of it as changing light into electricity, raising the electricity then transforming the increased electricity back into visible for our eyes light. So actually you are looking not through the monocular, you are looking through the green-tinted recreation of an image.

Thanks to the quality of night-vision technology, it becomes possible for every person to see an object being over 200 yards away from you in poor light conditions and even on a cloudy night!

The Reason for Picture Is Green


Why do we see the green color? And the answer is: the green gleam of a phosphor. It is believed that human eyes are more susceptible to green light because it's a color that is good for us to pick up details. What is more, it is believed to keep our eyes from getting fatigued.

On an everyday basis, such devices are used to break barriers both professionally and personally.

A Bit About technologies


It is not a secret that night vision can work in two very different ways. Everything depends on the used technology.

Image enhancement - The principle of how it works is in accumulating the tiny amounts of light invisible to our eyes and expanding it to the point that let us simply see the image. Thermal imaging - Such technology picks up the infrared light that all objects emit and display them in the picture. More heated objects emit more light than cooler ones.

Let's sum up some of the advantages and disadvantages.

Night vision goggles were invented not only to give the user the ability to see in dark conditions but also to boost its power with effectiveness.

As we have already said: none of night vision devices will make you see without any source of natural light. To operate in total darkness you will require additional light source, such as infrared illuminator.

Possessing better vision than the opponent's makes you as powerful as your favorite online game character.