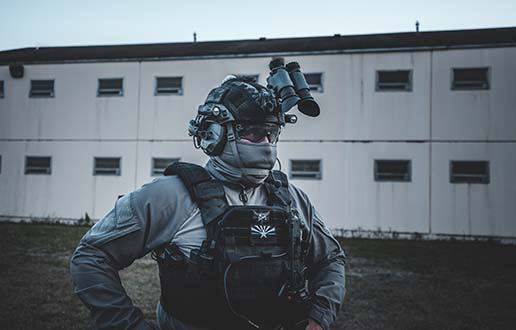 
The priority of using the most advanced night vision devices still rests with the military. In fact, the leading states stimulate scientific research in this industry. Night vision systems have been around since the 1930s. German troops used them during World War II on tanks and by snipers. But such units required infrared illumination so that night vision devices could see something. That changed in the 1960s when modern systems were developed for the U.S. Army. Since then, all subsequent generations of equipment - most commonly used as NVDs - have operated based on infrared reflection from heat sources, which is amplified and then converted into a visible spectrum image.
Night vision technology has undergone several waves of scientific and technological advancement over the past 90 years. Today, the night vision market offers devices that operate on the same principle used by the military in the 1960s. Several generations of night vision devices have emerged over the aforementioned period. These generations are classified as Gen1, Gen 2 and Gen 3.
The most modern devices are Gen 2+, amplifying the light by 80 thousand times, and very recent "digital generation," working on another principle. Instead of Optical Magnification, it uses a matrix sensitive to IR radiation (although they cannot work in complete darkness without IR illumination). Military and hunters are now offered products for all tastes - not only night goggles and sights, but also special attachments for conventional optics.

A brief history of technology in Europe


German scientists were the first in the world to achieve tangible results in creating night vision technology. Already in 1939, the German army had early samples of NVDs. It is believed that by the end of World War II, the Germans had produced no more than one thousand night vision devices, including 50 stationary NVDs for Panther tanks and 310 portable Vampire complexes for Wehrmacht foot soldiers. On the other side of the Western Front, however, the Allied secret services closely monitored the scientific successes of German scientists.
According to some reports - the famous night attack on Berlin, in which the Soviet army used powerful searchlights, according to the official view - allegedly blinding the enemy soldiers, in fact - blinded the German night vision devices, putting them out of action.
By the mid-1950s, there was a breakthrough in miniaturization: the Soviet Union began to produce the NSP-2 sight, which could be mounted on the Kalashnikov assault rifle, Degtyaryov machine gun, RPG-2 anti-tank grenade launcher, and other weapons, equipped with side-folding bars. The weight of the set, the so-called Russian NV in marching gear, was 16 kg and in combat - 4.9 kg. The NSP-2 was also actively supplied to the countries of the Warsaw Pact.
The 70s - a breakthrough: Optical Magnification managed to increase input gain to 20 thousand. After this (second) generation, sights and night vision goggles began to multiply like mushrooms - reducing electronics size did its job.


Depending on the devices used, specialists divide night vision devices into generations. This is a conventional classification due to the development of technology. The principle of operation remains the same - amplification of weak light from weak sources. Now there are three generations of night vision devices and the so-called fourth generation. Night vision generation comparison is tough because each generation most often has its own practical application. Each of them, except for zero, has evolved and improved independently. As a result, models with improved features of the base generation get a plus sign.
However, the so-called fourth generation devices use gallium arsenide photocathodes and a sophisticated voltage synchronization system. In fact, these are third-generation converters, which have improved characteristics by removing the ion-barrier film. In addition, the increase in sensitivity has dramatically reduced the Optical Magnification lifetime - up to one thousand hours. This technology is referred to as Filmless Gen 3 or filmless. Although some night vision manufacturers continue to use the term Gen 4 for promotional purposes.


Now the technology continues to develop very actively. For example, in May 2021, the US night vision manufacturer released a video showing how their new night vision technology works. Generation 3 night vision goggles, previously used by the army, showed everything in greenish light. Now the new technology shows everything in a light very similar to neon. Perhaps that is why it is sometimes called colored night vision. If you watch the corresponding videos on the Internet, you can pay attention to the fact that the image in the new NVDs really looks like a futuristic computer game. The future has already arrived.
Another development is the IRWAY night vision system. The system's monitor acts as a projector and displays an image in the field of view on the car's windshield. The system allows you to see up to 50 yards with low-beam headlights and 150 yards with high-beam headlights. And that's not all innovation and the future of night vision devices. At the pinnacle of progress so far are the latest generation devices, providing fifty thousand times the brightness gain through the use of photocathodes made of expensive gallium arsenide (AsGa). Only a couple or three countries in the world can produce these extremely sophisticated devices that allow one to see for many kilometers under nighttime cloudy skies, rain, smoke, and thick fog.
In 90 years, night vision has made a huge leap forward from huge devices mounted on tanks to super-telescopes. The only thing left to do is to wait for the dream of science-fiction writers - ordinary-looking glasses that allow you to see in total darkness. But, even such technology is already in development. The new development combines computer vision, tubes with white phosphor, and binocular design. The glasses can be used during the day in fog and smoke, and the image through them is apparent, bright, and close to the real thing.
We use cookies to make our website easier for you to use. By using the site you consent to the use of cookies.
Learn more about cookie settings Privacy Policy Understood