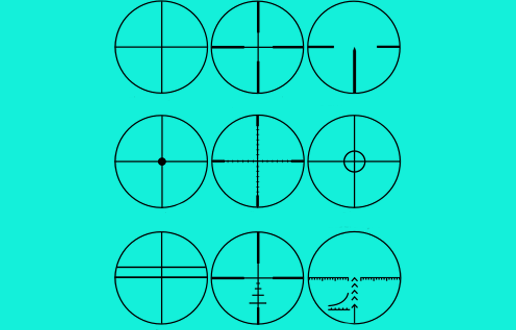 A scope reticle is a simple dot that pops up when you’re aiming the rifle scope.Nowadays thanks to this shooters can easily aim and get proper shots. Each reticle has its own design, purpose, and the way it was manufactured. Determining first such criteria as precision, robustness, hunting conditions, and overall productivity will help you to find the perfect reticle because at least you'll know what do you want and which aspects to consider.
For many years, plain crosshair reticles were the most popular ones. But thanks to technological processes nowadays the market impresses its buyers with various outlooks of reticles. The navigation, focus, clarity, and range variation became much better. Each different reticle type is going to have its different use. What you are looking for depends on for which purposes you are going to use it. Are you trying the target practice or you are trying to make the 50-yard shot? All these questions are gonna affect what reticle you really need.  Whatever reticle you have is going to be rendered absolutely useless if it's not in the first focal plane. Even if the scope is equipped with the marker or something that tells you to which power to adjust or which magnification setting to choose. You don't need a second focal plane scope with the ranging reticle because even if you're set to where it's supposed to be, a tiny hair off and magnification is going to throw off your angular uniSZa measurement by a lot. That's talking about variable power scopes. If you have the fixed one, don't worry, the magnification will not change therefore your reticle will always be perfectly right on.  Now, let’s take a quick look at optical parameters to reveal all the nuances before buying a scope.

Objective lens
The larger objective lens you have, the larger light-gathering you'll get. But a lot of cheap scopes try to make up for really poor lens quality by making really large lenses to make it seem like high-quality ones. That's why we recommend you better focus on the glass property rather than objective lens size.

Exit Pupil Diameter
It's how large the image is going to be projected on your eye. If you want the image to look huge and full when you put an eye behind the scope you want a larger objective lens and lower magnification settings. Basically, your exit pupil diameter in millimeters is your objective lens divided by magnification.

Field of View
The amount of area through which viewers will see the surroundings can be measured in the linear value of angular value.

Eye Relief
Eye relief denotes the distance from the last surface of an eyepiece through which the viewer’s eye can obtain the complete viewing angle. Most eye-reliefs are usually low-power because the more power you have out at the end of your arms the more shake you see. So, you're better off with low power in most cases.

The choice of reticle types is huge on the market today. Reticles do a good job in the world of optics, that's why/ let's get a look at different reticle types.

To start with, this would be a perfect scope for a hunter. Most hunters have used this scopes for hundred years, it's the oldest reticle that's ever been around. The eye remains drawn to the aiming point because of the structure of a reticle. The centers are thicker and denser towards the scope edge while the crosshair centers are thin. Typically the duplex reticle comes in the second focal plane which means when you zoom in the magnification the reticle stays the same, it doesn't get larger.

Also known as Mil Hash, it's a range estimating reticle, this is a great reticle we recommend to anybody that doesn't know the distance to the target and doesn't have a way to find out the distance to their target via laser rangefinder or predetermined distance at a range. This reticle will help you to find a distance! What is more, this is basically a mid-price reticle. The reason we think it less popular than other reticle types is because the mil-dot reticle does require you to make some calculations. When you get a scope it will also give you a card that tells you what calculations to make in order to determine the range to a target. It also requires that you know the approximate size of your target.   Once you start getting into this, you'll open up a new world of options and a lot of doors. You can use this reticle on any rifle you want and ink any caliber you want, it's going to be consistent with anything. It's symmetrically encompassing the crosshairs in the very good middle, psychologically speaking, if you're under pressure and you have to make some shots it's not going to encourage you to aim somewhere else because it's all centered around the crosshairs.  What is more, reticles that have round dots can be more easily divided into different units of measurement than a line. Just a bunch of lines make it harder to discern angular measurements.

Leupold is a brand that is performed for innovative and world-class products. This type of reticle is also known as a heavy-duty reticle. External columns are larger and denser than regular duplex reticles. Best for poorly lit and bushy areas.

BDC stands for Bullet Drop Compensator. This one is considered to be the most popular and widely used reticle. BDC is basically aimed towards what the military would use. The reason for it is that the military has large contracts with immune and ammunition makers, they have contracts with scope manufacturers. The BDC compensating reticle requires you to know the range and was designated for specific rifles.   We recommend this reticle to anybody that has another way to range a target like a laser rangefinder or you're something that just plans on shooting out in the range that has already predetermined distances. So, if you are in a rage and it already has marked targets of 100-600 yards, and that's where you shoot primarily then we would suggest a Bullet Drop Compensating reticle, so you don't worry about finding your range. You can either range it with a laser range fighter or it's already set up for you. This type of reticle works with different calibers and it determines where your hold is.

This type of reticle has a similar shape of a Christmas tree. The hash marks increase in length with every extra marking on the 6 o'clock crosshair. This was made to give you hold and compensate for wind drift as your bullet strike and velocity is greatly affected at long-range distances. It is perfect for steel or competition. When you zoom in the reticle gets larger which makes the opening in the center of the reticle get bigger and if you are shooting fine aiming points it's not going to be ideal for you. There are some new models where the center is filled with a crosshair so if you do want to zoom in and aim at small targets you still have the ability.

All manufacturers are making similar reticles and are listening to their consumers. The more help we can get from a reticle the better off we are going to be, especially when it comes to variables that can change on the fly. You are going to use them in your firing solutions, not only to determine the target. We would recommend reticles that are clean and simple and the classic mil-dot reticle is probably the best.  Once a target knows that something's shooting at it, it is going not to stand there, so take your chance, but first, choose the reticle type that'll help you during the process.
<-- -->
We use cookies to make our website easier for you to use. By using the site you consent to the use of cookies.
Learn more about cookie settings Privacy Policy Understood