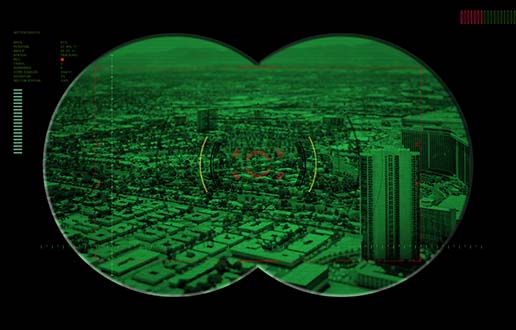 Red-eye flight is a common name for night flights or flights. The name itself tells us that the pilot has to use some device to improve visibility during the flight. It is clear that at this time, the human eye cannot see well. So, infrared illumination is often needed in addition to NVD because if you illuminate your way with an ordinary flashlight, it will inevitably lead to dazzling. This is where special night vision devices come in handy. Let's talk about them.

What is night vision?
Night vision optics has both military and quite civilian applications. It has been successfully used in aviation for a long time. But we need a little bit of theory. Optical Magnification and infrared radiation conversion into visible radiation and amplification of low brightness levels created on the observed object by the glow of the night sky, stars, and the moon in the visible and near-infrared spectral range - this is the base of night vision. Devices are divided into night vision generations, each more technologically advanced than the last.
The massive use of NVDs by ground forces predetermined the need for tactical aviation to master the night sky to support ground operations and civilian rescue operations.
The advent of aviation NVDs enabled night vision manufacturers to pilot at night. But some issues of coordination of aviation glasses with lighting and especially information equipment of cockpits remained. The problems are also the protection from external interference sources, such as on-board lights of other aircraft, or significant background brightness when observing long surfaces with homogeneous reflection coefficients such as snowy plain and water surface. It is also difficult to provide piloting when there is a large variation in the illumination value.

Types of night vision imaging systems
Speaking of night vision devices for night operations, we must not forget about the different types of NVDs in general. For hunting, for example, it is convenient to take a monocular with you, because it has a low weight and a good range. For hunting, in addition, night vision scopes will be handy. If you like to keep your hands free - then binoculars, scopes, and goggles are your choice. But are they all relevant for aviation? As it turned out, the most useful and used type of NVDs for aviation are night-vision goggles. They are designed for viewing the aircraft's cockpit space at night to enable takeoff, piloting at extremely low and low altitudes, and successful landing. If we are talking about more serious operations in the air, then other, more complicated devices will help the glasses. And in some cases, if we are talking about night aviation, human presence onboard is unnecessary.

Night vision imaging systems in aviation
A whole field of night vision imaging systems has been developed for night flights. It should not be forgotten that the homing heads of most aircraft missiles and other munitions also contain infrared-imaging devices in their components. This means that an aircraft can make a night flight without a pilot at all. But there is no doubt that human senses and skills are always stronger than electronics. New systems continue to be developed for this purpose. For example, the optronic surveillance system. It is used for patrolling and reconnaissance, selecting a landing site for a plane or helicopter. Monitors are in the pilot and passenger cabins. The operator (workstation in the passenger cabin) transmits information to the crew about the sources of threats detected on the ground.

This system allows:
• record photo and video information;
• transmit the characteristics and coordinates of objects, which makes it possible to conduct reconnaissance operations;
• work at night in tandem with an infra-red searchlight;
• work in light camouflage conditions.

The searchlight installed on the helicopter is often combined with the surveillance system and operates in infrared mode. Range: 1,000 yards in normal mode and 1,800 yards in infrared mode.
As we said before, the easiest way to fly at night for pilot night vision is with goggles. This provides a wide view of the space in and out of the cockpit. This enables clear reading of indication systems, maps, other sources of information when flying, clear recognition of large and relatively small objects for optimal route building (including assessment of potential hazards such as tall buildings, power lines, mountains, and trees. Glasses can be used for flights at dusk and night, aiming fire from helicopter weapons at low altitudes and also from light aircraft weapons at medium ranges, for operations in an urban environment (flights at low altitudes, high density of buildings, bright light sources) and night search operations over land and water surface. One of the latest aviation developments is the ANVG advanced helmet-mounted night vision goggles for army aviation pilots. Unlike the existing binocular glasses in the US Army today, with a 60-degree horizontal panoramic field of view, the new glasses will allow for a 100-degree horizontal x 40-degree vertical panoramic field of view. In addition, their resolution is 50% higher than that of today's NVGs.

Specific skills and training for using NVIS
Is it legal to own night vision goggles? It is possible only after obtaining a certificate for the right to conduct night flights using special devices. And there are several requirements for night vision helicopter equipment - internal and external illumination, availability of radar altimeter. This requires training. According to the flight task, the crews use NVIS to search and identify moving. Stationary objects, ground targets at different altitudes, and practice search and rescue activities to locate people and vehicles in the dark on flat terrain and remote forest areas. In addition, pilots perform flights at low altitudes, completely turning off lights and external identification signals.
The main purpose of such flights is to test the readiness of personnel to carry out combat and special missions and practice new tactical maneuvers with full use of the combat capabilities of aircraft and their equipment.
In the U.S. Army and other branches of the armed forces, much attention is paid to the creation of simulators and simulation platforms used to train operators in night conditions.

Conclusion
Night vision is important for organizing round-the-clock crewed aviation operations, the main striking force of modern combat operations. The use of weapons under night conditions requires good training of personnel and, above all, operators of modern weapon systems. Otherwise, it is easy to mistake and attack a so-called "friendly object" instead of the enemy's target.