IR remission - will it help to hide? 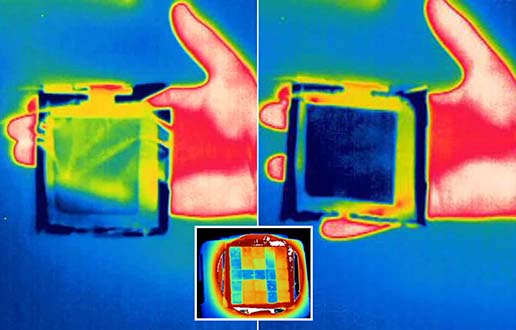 If Wikipedia is to be believed, infrared remission is the property of a fabric to absorb infrared rays. Clothing made of such fabric is actually the perfect camouflage to hide from thermal imaging and night vision devices. Is this possible, or is it a marketing ploy and a myth? To understand, we first have to look at the history and terminology of IR in general.

The history of the discovery of infrared radiation


Before we understand how ir remission is used, let's understand what ir lighting in general is and what devices can register it. That is, in fact: what exactly can you hide from by using clothes in remission? Frederick William Herschel first recorded infrared radiation in an experiment in 1800. While studying the problem of heating instruments to study the sun, Herschel tried to find a cause and a solution to this problem. Using a prism, Herschel tried to determine, using thermometers, the part of the spectrum of light that transmits heat into the distance. During the experiment, Herschel established several varieties: infrared illuminator long-range and infrared illuminator short-range, which are of interest to us in the context of this topic. In addition, Herschel found that the greatest healing occurs in the red saturated zone and possibly beyond its visible refraction. Immediately after visible red, infrared radiation begins.


IR remission is the fabric's ability that makes up the gear to reflect infrared rays with varying intensities, creating a pattern of camouflage. This is a critical parameter for camouflage against modern night vision and thermal imaging equipment. In thermal imaging or night vision cameras without infrared, the coloring of the equipment in the visible spectrum is not particularly important. Still, the texture of the pattern is sometimes lost altogether. As a result, this element of the outfit remains a white spot on the soldier's equipment, thereby demasking him. The detection range can be from a few tens to hundreds of yards, depending on the size of the piece of equipment that does not have an IR remission.
The use of infrared to visible spectrum transducers was first interested in the military, and by World War II, some night vision manufacturers had produced their first-night vision devices. The first samples appeared in 1936 in Germany. The first devices were used only with an IR illuminator for night vision, which means that it was relatively easier to camouflage from them. And only 90 years later, we are using super telescopes, night vision scopes, and thermal imagers of various kinds. These devices are different because they do not use only natural or artificial sources of radiation but register the radiation of heat from objects whose temperature is above 0 degrees Celsius. In this range, everything with a temperature higher than the surroundings stands out in contrast to the general background. For example, ir thermal scope can detect machinery radiating heat, traces from heated tires, radiation from the body, exhaled warm air from the lungs, and even hand traces on objects.

So, we found out that if we talk about visibility, it is necessary to make the image of a person "broken down into segments" as much as possible to fool the night vision device. To give camouflage the camouflage properties, the fabric of the equipment is specially dyed with pigments for different types of terrain. Thus, the soldier's camouflage even in the invisible spectrum becomes "broken," and it is difficult to detect even in the NVD.
So how is the infrared remission effect achieved? To do this, special pigments with appropriate spectral characteristics and dispersion are injected into the fabric during dyeing. It is always important to consider that the patterns and remission rates, for example, are different for mountain or desert areas. Hence, it is necessary to select camouflage of appropriate coloration and stain coloration. The Russian manufacturer puts more emphasis on the forest and steppe-type uniforms. The Asian fabric types are oriented to swampy terrain, and so on.
The fabric's IR rating depends on the dyes used in the dyeing process. When selecting dyes to create a camouflage pattern, you must consider the level of remission for each color: it should be in the range of 10-60%. For example, the gradation of a camouflage pattern of three colors looks like this: khaki (main background) - 60-70%, green - 30-50%, black/brown - 10-20%. When the remission is close to 100%, the body is brightly "glowing." When it is close to 0%, it is a dark spot. Outfit with IR remission is considered optimal if, in terms of camouflage, the silhouette in the IR spectrum range in the night vision device/aimer looks "broken" into parts, differently reflected in the infrared light with remission values characteristic of the natural background of the surrounding landscape.
However, if we talk about hiding from thermal imaging devices the color of geer will not work until the camouflage is made of the specific fabric that will not allow the thermal imaging device to detect the heat of the body.

Purpose and advantages of IR remission


Especially noticeable to the eye in NVDs are unnatural details: square pile details for patches on uniforms, rectangular pouches, alternating MOLLE - slings on backpacks, semicircular edging. It is worth noting that in such camouflage is of great importance a comprehensive approach - it is necessary to test all equipment for infrared remission because even one element can de-mask a fighter. Therefore, it is worth taking the time to test each piece of equipment in NVD. Night vision manufacturers often resort to new research to determine camouflage. So, to hide, you have to be craftier. A few trip hacks for IR remission camouflage:
First, to hide, the fighter must not have an exposed body;
Second, there's a big difference in washed and unwashed clothing, new and old, synthetic or natural fibers. Even the mountain camouflage becomes more natural if the clothes are first crawled and rolled on the ground. But in this case, the impregnation can deteriorate, and the camouflage becomes disposable;
Third - it all depends on the lighting conditions of the area. Some fibers have an unpleasant feature: they glow when illuminated by infrared sources.
Don't forget that the effect of IR removal should be complex and apply both to the uniform and all elements of combat equipment. Otherwise, the fighter risks giving himself away with some de-masking item.


IR remission does exist. However, many still consider it a myth only because it is difficult to achieve high rates. The purpose of the camouflage determines its requirements. A military camouflage with infrared remission requires camouflage both during the day and at night. Important characteristics are high exploitation qualities, mechanical durability, unchangeability of color during long-term storage or permanent use. The remission of a textile material mainly depends on the dyestuff with which it is dyed. The task is considered completed if, from the point of view of camouflage in infrared light, the figure or object looks "broken up" in night vision devices, reflected differently in infrared light, with remission values characteristic of the natural background of the terrain.
We use cookies to make our website easier for you to use. By using the site you consent to the use of cookies.
Learn more about cookie settings Privacy Policy Understood