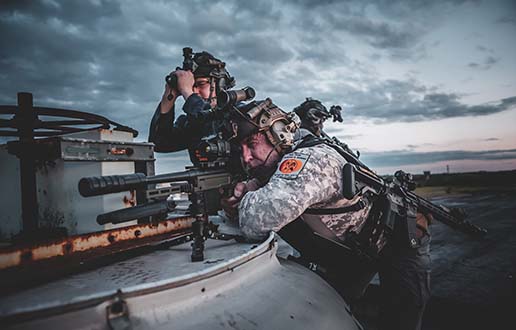 The market of night-vision devices is huge and the number of competitors is growing fast as scientists continue to innovate technologies that are not just convenient but a super instrument to save millions of lives. But what was the overall situation when people just started to use night-vision technology?
It is quite interesting to learn the history of night vision because it's hard to imagine a military without night vision technology. As we go through time we need to say that it progressed immensely. Step by step night vision generations were designed and transformed from heavy and massive devices to lightweight and functional ones. To know the evolution of night-vision means to understand the benefits of modern fast-growing technologies. So, in today's article, we gathered all the necessary info for you to make the evolution of night-vision maximum engaging, clear, and simple. So, let's get it started!

How Night Vision Technology Has Developed

A long ago, one of the U.S. military's most significant purposes has been to own the night times with a variety of night-vision devices that rely on technologies like infrared (IR) imaging and light intensification. This is since nighttime is the most approachable time to do missions because the opponent is the weakest and most vulnerable. Starting from the 1940s the study for technologies that can provide good vision in the darkness started in the United States. But the fundamental and primitive infrared devices were produced in Germany and were identified as Generation 0 devices. They expanded actual light to about 1,000 times but were very heavy and cumbersome. They basically had so big infrared searchlights that they needed to be fixed on flatbed trucks that made them a real target for the enemy.
Since the terms of the Persian Gulf War such devices were used, allowing the soldiers to see in the dark conditions and bringing a lot of benefits over the opponent. The first Generation of passive night-vision technologies was developed in the 1060s. Such devices were named “Starlight” because it had the unique capability to pick up and amplify the visions that could only be observed by starlight. It was goggles that provided the best effects under the moonshine and didn't really need infrared illuminators as a function. Other devices like the little starlight scope were crucial actually in the Vietnam War with some warriors often fighting very low light jungle situations, which is extremely risky, as you may understand.

In 1965 The Department of Defense located the laboratory to develop the previously existing idea. Later, in 1970 a bunch of improvements in thermal imaging was made and passive Generation II devices appeared. Because these devices were provided with greater optics, tubes, and resolution they became the biggest advantage over the enemy.
By the end of the 1980s Generation III technology was being invented. The main advantage was a different photocathode that provided the ability to observe in the dark, smog, and dust conditions better than Generation II. Thanks to gallium arsenide the image resolution and reliability were also profoundly developed.
The image intensifier tube, which is the central going element of night vision equipment, is made up of hair-fine fibers of optic glass. The image intensification uses an ambient light like moonlight and amplifies it through an electrical and chemical manner. This creates the ordinary clear green image we used to see in movies and videogames. This is possible thanks to thermal imaging that catches the infrared rays emitted by humans and things which is really the way we're beginning to go in today's world now. The image intensification brings the ability to work in total darkness when there is no touch of starlight to raise.
The technology of wearable night vision devices, such as enhanced night-vision googles, evolved different materials, kinds of battery packages to make the device suitable for complete portable applications. Night vision goggles were beneficial for most personnel including pilots and infantry with increased depths of field.
Compared to the monoculars, binoculars were a lot more advantageous when going into a night vision environment because they give you a complete night-vision picture instead of just standalone one eye. Depending on the kind of firearm you are using, it can be quite easy or quite difficult to interchange between optics.

Now, night-vision tools can amplify light fifty thousand times or more compared to the Second World War times. With the fast increase in thermal imaging and infrared technology fields, optics companies continue to improve their equipment in order to keep up with extremely demanding business. What is more, night vision devices are becoming more and more affordable to non-military use.
Night vision is forecasted to remain in the biggest market for defense for more than three years. It's expected to show the highest revenue growth through 2020 exceeding nine billion dollars. Night vision technology with a variety of features is opening the floodgates for the military world of night-vision capabilities.
The standard thermal imaging and very unique and adaptable forms of night vision we use can be replaced with a new upcoming camera-based system that allows the user of the optics to practice a rifle looking around corners, recording footage, reconnaissance, and tracking targets. Technologies are advancing so quickly, that it can recognize friend or foe and even look through smoke screens. What has become a genuine game-changing thing is the fact that firearm mounted cameras can be integrated with the reticle.
Nowadays, optical designers are looking for minimalistic ideas and materials that can be done at a very high level but decrease weight at the same time. One of the most immeasurable benefits of the NVG is that its wick system of complicated technologies gives the user higher situational consciousness. For instance, it can highlight the outline of the soldier in comparison to the backdrop of anything else which makes it a pretty clever technology.
So, no matter how many changes were made in the night-vision field, the main principle is staying the same: Such devices are not just a technology used by millions of people, it is a life-saving kit!
We use cookies to make our website easier for you to use. By using the site you consent to the use of cookies.
Learn more about cookie settings Privacy Policy Understood