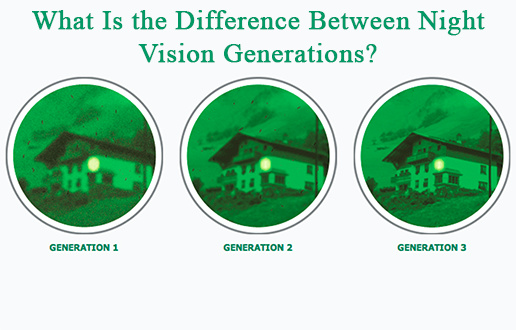 Nighttime has always created challenges for hunter's security and surveillance professionals and outdoor enthusiasts alike. The lack of available light during the late make eyesight difficult even with a full moon. Thankfully, technology has taken great strides with different night-vision solutions since the late 1980s. Start from the Vietnam War end up with the modern world, night vision devices changed its sizes, weight, resolution, usage, interface. Every new numeral after the word "Gen" has brought a huge transformation to how people raise their effectiveness at night. But what are the differences between these types of night-vision technologies? In today's article, we gonna tell you not only about past generations but also find out the perspective of modern inventions you haven't heard before. Maybe sometimes humans will have the sharpest vision at night without using any devices. Intrigued? So, just read the article.

During the Vietnam War Generation, 1 NV devices became relevant and were quickly considered to be the most popular in the world. These devices rely on ambient light to produce an image. The Gen 1 intensifier tubes amplify light about 1,000 times greater than the human eye but first night-vision generation does have its downfalls which include blurry edges, low resolution, and dependency on infrared illuminators. The truth is, that very first night vision generation is the lowest cost device you can buy. This unit will save from $ 200 to 400 just depending upon the brand the features it has.

Generation 2 is brighter, has a sharper image, more distinct imagery. It goes all the way up to what the military is using now which is just phenomenal. It's all of the scales in performance and cost. Generation 2 makes improvements to the Generation 1 tubes inside the device by adding a microchannel plate to help increase light gain and resolution. It is a significant improvement to the Gen 2 image performance but it also has roughly the same light sensitivity as the generation one night-vision devices have. To speak honestly, the second generation of night vision goggles has embodied a huge technological leap forward. And, actually, the difference between the third and second gens is much less than between the second and the very first systems. More recently night vision technology came on the scene, unlike the generation models digital models are not harmed by light exposure because there are no intensifier tubes. Digital devices can also be used during the daytime, however quality is similar to the Gen1 device, and adding infrared illuminators helps make them more effective. The digital interfaces of each device can also make recording day and nighttime scenes possible. Many NV devices also can zoom and change reticles.
Then there was thermal technology that uses heat to create an image rather than the ambient or artificial light like digital thermal can be used both day and night and also has the ability to record your outings and incorporate a zoom feature. Thermal devices have a detection range past 2000 yards and detect heat signatures from recent movement. Thermal devices are very effective in locating live targets quickly even through the brush.

Naturally, the generation 3 devices became the next step up in the night vision technology. Generation 3 is a great deal. Conventionally, representatives of the third level of development of night-level devices are divided into several classes. But, this division is very arbitrary because of the amazing capabilities of all classes. They all provide the highest picture quality and are insensitive to interference, such as car lights, glare, house lights, etc. The third generation uses the same image transmission technologies as the second. But, due to a tube photocade to the screen, the quality becomes even better. The third type of night vision systems have the brightest, sharpest, and increased tube life of up to 10,000 hours. Those reasons make these devices very reliable and that is why Gen 3 devices are currently being used by the United States military. One caution when using Gen 1, Gen 2, & 3 NV devices is to take great care not to expose the internal tubes to daylight because they can burn out. So, the 3 Gen devices are great and will provide excellent performance at a budget.

There is also a Generation 4 but it's not really something that we as commercial users can have access to. After presenting the so-called fourth generation, the army gladly recognized its status. After practical tests that did not show compliance with high military requirements, there was some disappointment, which led to the cancellation of recognition. Despite this, many unscrupulous companies continued to label their products with the "Generation 4" mark. Therefore, carefully study the accompanying documentation and do not fall for tricks.

The Future of Night Vision Technology

Have you ever thought about what the future of night vision devices will look like? Time does not stand still, people's minds are improving, striking the whole world with new inventions. Let's take a look at unique White Phosphor Technology that is very popular nowadays. By replacing green color with black and white, we have the ability to see details more clear and avoid eye strain. The color comes from the phosphor used in the tube. Such technology is crucial especially when the need to identify a target at night is necessary. It provides more detail and leads to less eye strain than the old green phosphor.
What is more, White Phosphor Technology is not the only invention that deserves our attention. Special injections developed by researchers from Arizona State University could give soldiers the power to see in the dark conditions without goggles and monoculars. It has been proven on mice's eye that nanoparticles that were injected, allow them to see in the darkness. Researchers believe that the same will work for people. All that we can do is just believe in the distinctive feature of these inventions and wait.

The Future of Night Vision Technology

Night vision is a great tool to have on nighttime excursions and it is important to know the difference is to determine which kind of night vision suits your needs. Choose the one that will satisfy your needs and we promise, you will not be disappointed! Backdrops one scope on numerous programs
We use cookies to make our website easier for you to use. By using the site you consent to the use of cookies.
Learn more about cookie settings Privacy Policy Understood