Advantages of a monocular over spotting scopes, binoculars and other types of optics. 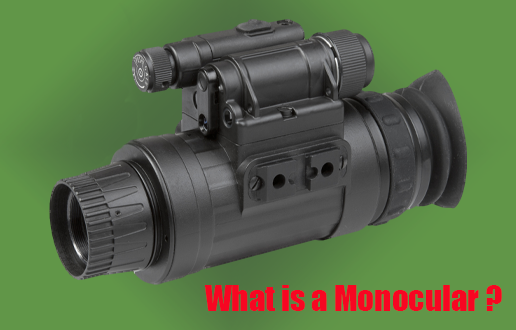 Monoculars are simple and usually the most accessible night vision devices, which look like a modern spyglass tube. Their field of application is very wide. They are tourism, hunting, repair work, area protection and surveillance of various objects. In this article we will talk about monoculars, how to choose and what to pay attention to. And also on the main differences between monoculars and other night optics devices.

Monocular is one of the types of optical devices, which is widely used during hunting, object protection, research, police operations, as well as for active recreation and mountaineering. The name of the device implies the presence of one optical channel, respectively, you can only look into the monocular with one eye. Of course, there are pseudo binocular models, but everything is in order.
The device consists of a lens, a signal amplifier, which is most often used as an image intensifier tube (IIT) (), and an eyepiece in which the user observes the resulting picture. The purpose of processing is to make visible to the naked eye that part of the landscape and objects focused on it, which due to low light is not visible or is very poorly visible.

Why choose a monocular?

The main feature of the monocular for hunting - is an affordable price, it can be bought by almost every hunter or tourist. Cheapness is due to just one optical path, one IIT, no need for impact resistance to recoil (as opposed to the sight), lack of sighting mark, etc.
You should not assume that this device is ineffective or useless at all. It is very convenient to observe the terrain or to track the beast. Most varieties have Weaver rails on the body to attach additional accessories, such as, for example, directional microphones, additional infrared lights to work in total darkness, in addition, the monocular itself can be fixed to the head or helmet. Head fixation allows you to observe the terrain in total darkness with your hands free. This is very important for hunting, because you can flip your gun and shoot at any time. Monoculars are often used for hunting. It helps to track the beast, and in general to control the area around the hunter, which at night is very important. The design of these devices implies a certain versatility. You can observe simply from your hands or from a tripod. With the help of special brackets, compact models can be mounted on a cap goggle kit or helmet to free your hands. A special adapter allows you to mount a monocular device in front of the rifle's simple spotting scope sight, making it a night vision sight.

Understanding the differences between monoculars, binoculars and spotting scopes

When it comes to field optics, the choice is usually between a spotting scope, monocular and binoculars. At the same time, any hunter would like the selected device to meet the following requirements: viewing range, wide field of view, compactness and light weight. But to combine all this in one device is very difficult, usually you have to do something.

Choosing the right monocular for you

Choosing a monocular for hunting is a nontrivial task. There are a lot of factors to consider. Of course, one of the main factors will be your willingness to spend this or that amount, because really good specimens (thermal imaging cameras, models with II+ and III generation IITs) cost a lot of money. On the other hand, you should clearly understand what kind of device you need, what the requirements are. It may well happen that you do not need an expensive device with enhanced tactical and technical characteristics. Therefore, it can be concluded that the correct choice of product depends on the experience of the hunter, who will be able to tell which monocular is better for hunting (taking into account all these nuances).